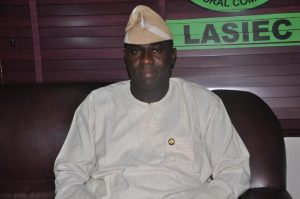 Dr. Noah Lawal-Jinadu was born in Isale-Eko, Lagos Island on 18th April, 1967. He is a member of the chieftaincy and royal families of Sasi, Eletu-Iwashe and Osuro-Oloto respectively.  He attended Mushin Local Government Primary School, Mushin, Lagos between 1974 and 1980 for his primary school education and Okota Grammar School, Okota, Isolo between 1980 and 1985 for his secondary school education.

He served in the Public Affairs Department (PAD) of the Nigerian National Petroleum Corporation (NNPC) as a Public Affairs Officer during his National Youth Service between 1995 and 1997.

He was employed by the Lagos State University, Ojo in 1999 as a Graduate Assistant in the Foreign Languages Department where he rose to the position of a Senior Lecturer in 2015. He served the Department in different capacities: Postgraduate Co-ordinator (2010-14), Head of Unit (2015-17), member of the Faculty of Arts Disciplinary Committee (2016-17), member, Examination Mal-practices Committee, LASU External System, Festac Campus (2016-17), among others.

He also attended some classes in the Nigerian Legal System and International Law and Diplomacy in the Faculty of Law of the University in 1997. He obtained his PhD in Arabic Textlinguistics and Translation Studies from the International Islamic University, Kuala Lumpur, Malaysia in 2008.

In the course of his academic career, Dr Lawal-Jinadu has attended a number of seminars and conferences both locally and internationally. He has also written and published several articles and presented papers on different aspects of Applied Linguistics and socio-religious issues.

He is a member of several professional and academic organisations, including the African Linguistics Association, Illinois, USA; American Association of Arabic Teachers, USA; and the International Pragmatic Society, USA.

A dedicated academic and revered religious cleric, Dr Noah Lawal-Jinadu was appointed as a member of the Lagos State Muslims Welfare Board (LSMWB) where he served the State diligently between 2009-2012/15.

He is also a member of several social/religious associations and currently the General Secretary, Isale-Eko Descendants’ Union. In recognition of his contributions to humanity, he has received a number of awards from various organisations.

Dr. Noah Lawal – Jinadu was appointed and sworn into office as a member of the Lagos State Independent Electoral Commission (LASIEC) by His Excellency, Mr. Akinwunmi Ambode, Governor, Lagos State in June, 2017.

You could tell districts essay writing service cheap that if you will do this, we will take away all the strings as to how the money is going to be spent, and that probably is the way the governor will go, he said.
Share
Previous CHIEF ( MRS ) SEKINAT TOYIN IBRAHIM- FAMAKINWA-Member
Next PROFESSOR GABRIEL OLATUNDE BABAWALE – COMMISSIONER