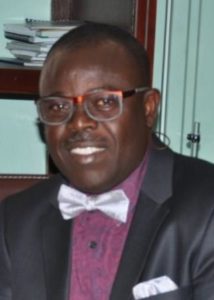 During his swearing- in ceremony as Permanent Secretary, Gov. Akinwunmi Ambode, had described him as a very competent person, stressing “ I have absolute confidence in his ability given his pedigree as a progressive-minded civil servant who has satisfied this administration’s standards of competence and passion for excellent service delivery”.

Mr Ogundeko, a lawyer was, until his appointment as Permanent Secretary, the Director, Legislative Drafting and Legal Services Department of the Lagos State House of Assembly where he also served as Legal Adviser to several committees of the House.

Born on 11th December, 1968 he attended St. James’ Cathedral Primary School, Oke–Bola, Ibadan where he obtained his Primary School Leaving Certificate in 1980. He also attended Christ Apostolic Grammar School, also in Ibadan between 1981 and 1984 before he moved to the Baptist Academy, Obanikoro, Lagos in 1985 where he obtained his West African School Certificate in 1986.

In 1987, Mr Sesan Tunde Ogundeko was admitted into the Lagos State University (LASU), graduating in 1991 with his first degree in Law. He thereafter proceeded to the Nigerian Law School where he obtained his Bachelor of Law degree in 1992.

Also in a bid to satisfy his quest for more knowledge, Mr Ogundeko obtained a Master’s degree in Public Administration (MPA) from the University of Lagos in 2003 and another Master’s degree in Legislative Drafting from the Nigerian Institute of Advanced Legal Studies.

In 2006, Mr Ogundeko transferred his service into the mainstream Civil Service of the State as Chief Legal Officer and was consequently deployed to the Lagos State House of Assembly.

Between taking the psat and the sat, the report found that 5 percent of juniors who https://order-essay-online.net/ order essay online were on target for career and college readiness fell off target by the fall of their senior year.
Share
Previous MR. MUTIU ADETOLA SANWO, DIRECTOR OF ADMINISTRATION AND HUMAN RESOURCES
Next MR. OLUSEGUN FASU AYEDUN-Member
SEO Ajansı